Home For sale How to buy a HDB flat Old HDB flats in Singapore: To buy or not to buy?

All HDB flats in Singapore are built with a 99-year lease. And when the lease expires, your HDB flat is returned to the Government.

That hasn’t happened yet, since the oldest HDB flats in Singapore as of now are only just reaching 60 years old. We’ll update in another 39 years, ok?

In the meantime, we debunk (or verify) some ideas that Singaporeans have about old HDB flats:

The bad news: Lease decay. Older flats are “worth less” because they have a limited number of years left on their lease; and in general, they’ll be worth less and less.

The good news: Nonetheless, people apparently still don’t mind buying older HDB flats. Out of all of the resale HDB flat transactions in 2009, only 1.9% were made up of HDB flats over 40 years old; this number rose almost 8 times to 13.9% in 2018.

In less centrally located districts like Bukit Batok, we see a similar pattern (albeit less pronounced): $340,000 against $395,000.

As much as its diminishing value could be a deterrent, it’s probably also a selling point for buyers looking for cheap HDB flats.

Most Singaporeans generally have the impression that new BTO flats these days are smaller than older resale flats in terms of overall size as well as the size of individual rooms.

BUT!! That’s only if you compare super old HDB flats to super new HDB flats, as flat sizes have remained constant in size for the past 20 years.

HDB isn’t trying to shortchange you – they’ve also improved the layout of HDB flats to make it easier to maximise every inch of space within the flat.

Take for instance these 4-room HDB flats. Because the store in the old layout is awkwardly sandwiched between the living room and the kitchen, it strictly separates the two spaces. By simply shifting the store in the new layout, you can choose to hack the walls between the living room and kitchen, and combine the two spaces into one larger, more conducive living space. 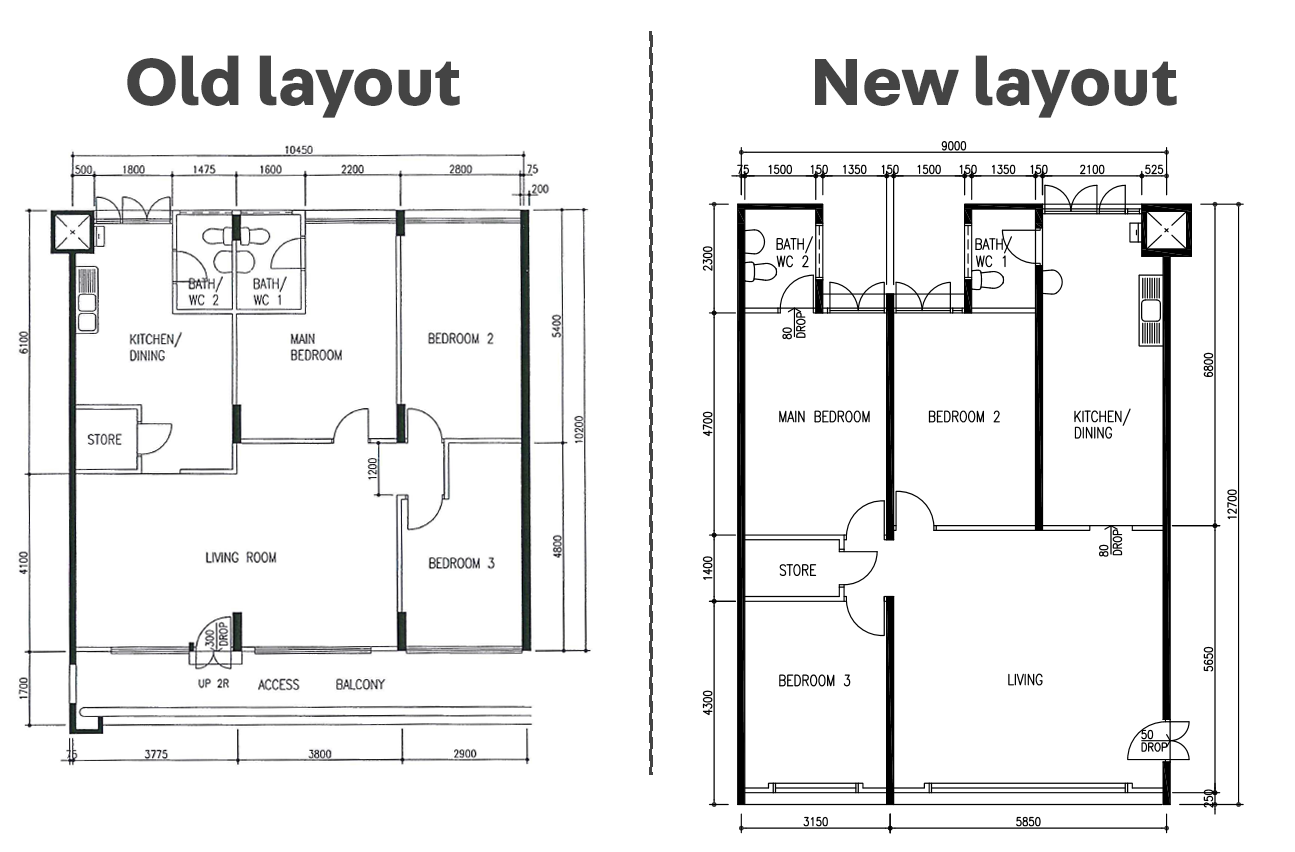 This might be one thing you’ll want to look out for if you’re buying an older HDB flat: Does the flat layout allow you to style your home the way you want it? What can you do with the larger space?

That’s not to say you can’t integrate them aesthetically into the design of your home. Case in point: The rounded doorway of this old HDB flat in Kallang (it’s for sale, btw!) adds to the Scandinavian aesthetic. We like! 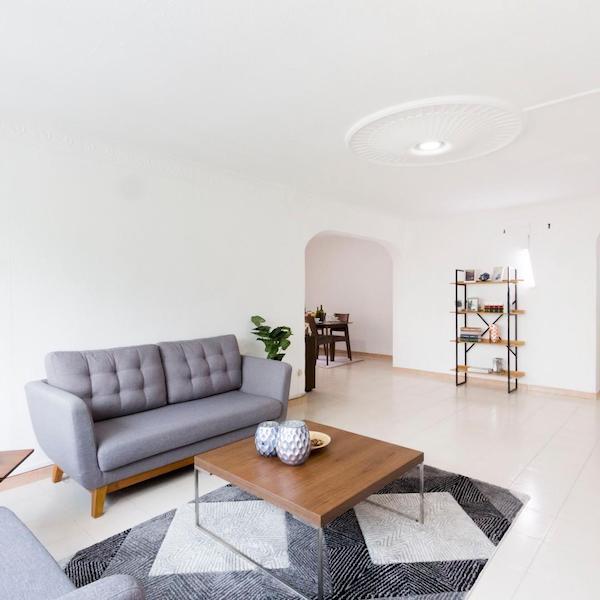 True. People these days are having back problems at 25, so imagine them when they’re 50.

It’s the same with HDB flats – if you’re planning to buy an older HDB flat (or any HDB flat, for that matter), first check the property for mould and other signs of damage. If it’s all good, then you’re safe, right?

Unfortunately, that’s not the end of the story. Sometimes, for instance, the problem could lie with other units within your HDB block, such as ceiling water leakages coming from your upper-floor neighbour.

According to HDB, flat owners of upper and lower floor units have a shared responsibility in maintaining the conditions of your respective flats, which means any repair costs will have to be shared between the both of you.

Not to say that new HDB flats won’t encounter such problems, but gentle reminder once again that your back problems are going to be much worse when you’re 50.

True/false: Older HDB flats are much more likely to get en bloc-ed.

In the Selective En Bloc Redevelopment Scheme (SERS), certain HDB flats are selected to be repurchased by the government.

If your HDB flat is selected, you’ll have the option of moving to a new home with a 99-year lease and also receive compensation for rehousing.

That said, not all old HDB flats will automatically be selected for SERS (Government say one). In fact, only 4% of HDB flats have been identified for SERS since it was launched way back in 1995. So we’d say false.

While it’s true that there’s no good reason to en bloc a newly built BTO project, don’t count on SERS to definitely happen to your older HDB flat.

True/false: Older HDB flats won’t last me for the rest of my life.

False. The limitations placed on how you can finance your HDB flat is actually a way to ensure that you’ll have a roof over your head even in your old age.

If the flat can cover you until you’re at least 95 years old:

If the lease doesn’t expire before you turn 95, you’re allowed to use your CPF savings to finance your flat up to the flat’s Valuation Limit (the current property value or the purchase price of the property, whichever is lower).

If the flat doesn’t cover you until at least 95 years of age:

You’ll only be allowed to use your CPF funds up to the Valuation Limit pro-rated according to the length of time the lease can cover you.

This is meant to ensure you’ve got adequate funds in your CPF account, so that even if your lease expires in your lifetime, you’ll still have finances to have a home till a ripe old age, and, you know, survive and stuff.

Use the CPF Board’s calculator tool (not the same as the one above!) to determine the limit.

But if the flat has less than 20 years of lease remaining:

You’re not allowed to use any CPF savings to finance your flat.

To buy or not to buy?

Although some Singaporeans think buying an older HDB flat is a bad property move, the increasing popularity of these flats suggest otherwise.

Perhaps some like the allure of older flats, especially those in heritage-rich districts like Tiong Bahru or Marine Parade; or for others, they’re most attracted to the price tag.

In any case, don’t immediately dismiss these older HDB flats, and you might just find yourself a gem. (Tip: If you’re home-shopping online on platforms like Carousell, use the comprehensive filters to narrow down the options according to your preferences.) 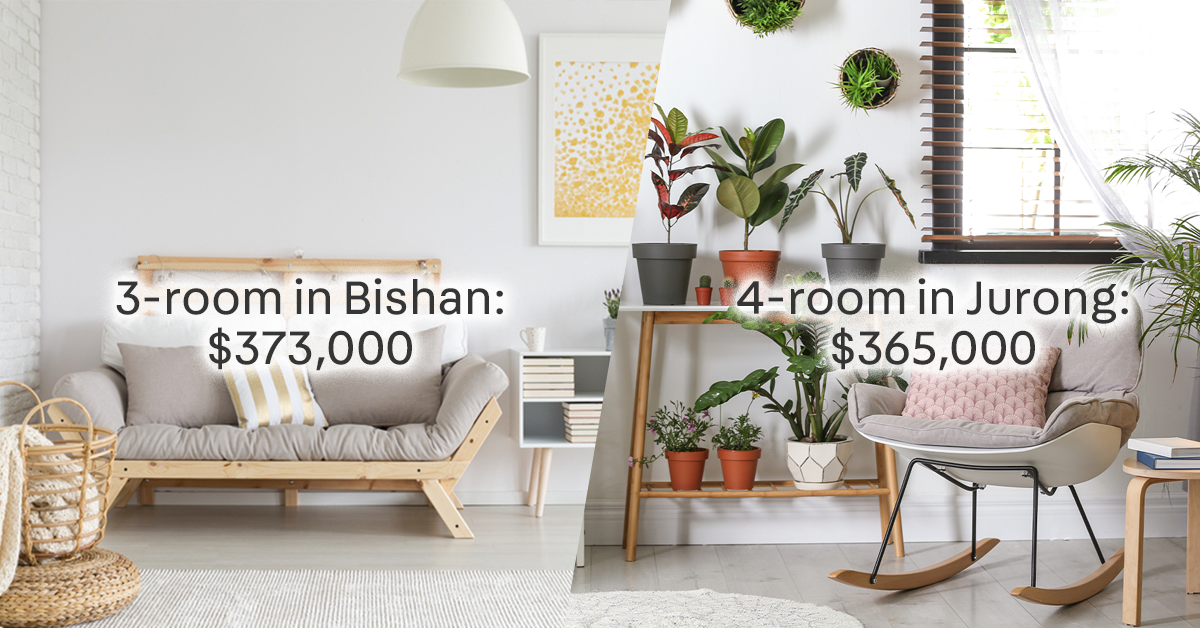 HDB prices in Singapore (Jan-Jun 2020): How much is your resale HDB flat?