Home For sale How to buy a condo Freehold vs 99-Year leasehold condos in Singapore: Which is better?

In Singapore, all HDB flats come with a 99-year lease, while condos could be either 99-year leaseholds or freeholds.

Your next question would probably be: So?

99 years is long enough to last you a literal lifetime, so what’s the big deal about whether a development is a 99-year leasehold or a freehold one?

Here’s a breakdown of the various ways a property’s tenure could affect your property-buying decision, from their en bloc potential to your sell strategy:

1. Value of leasehold vs freehold condos
2. Value in an en bloc sale
3. Are 99-year leaseholds the same for HDB flats and condos?
4. Investment strategies

1. Value of leasehold and freehold condos

There are 2 ways to acquire land to build a new condo: First, buy land from the Government Land Sales (GLS), and second, acquire a site through an en bloc sale.

The thing is, GLS only offers leasehold plots. They’ve looong stopped releasing freehold plots due to land scarcity – which means whatever freehold land that we have now is all that we’ll ever have, recycled through en bloc. Scarce stuff is precious stuff.

So it could be a case of higher perceived value? Actual value? Perhaps a bit of both.

Freehold developments tend to command a higher price tag. All things being equal – location, size, nice hokkien mee at the nearby hawker centre – expect to pay about 10% more for a new freehold unit as compared to a new leasehold one.

Take for instance the 2 new launches, the freehold Amber Park near Marine Parade and the 99-year leasehold Seaside Residences in Siglap: 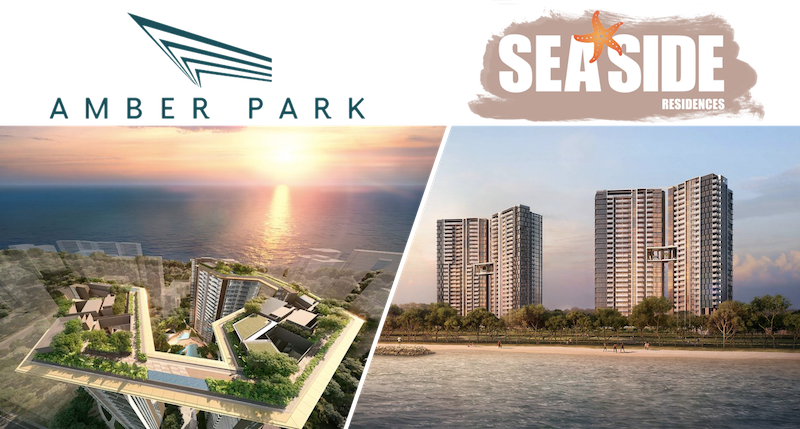 Both condos are sat close to East Coast Park – you get similar sea views, nature-side living along the city fringe, and all that good stuff.

But while Amber Park commands a heftier price tag from $2,160 psf; units in Seaside Residences start from $1,750psf. That’s a 23% price differential!

Of course, the health of the property market affects both types in the same way: Prices fluctuate according to peaks and troughs as well as shifts in market activity and outlook.

Bala’s Table is a Singapore Land Authority (SLA) resource that roughly plots the leasehold value of land as a percentage of its freehold value: 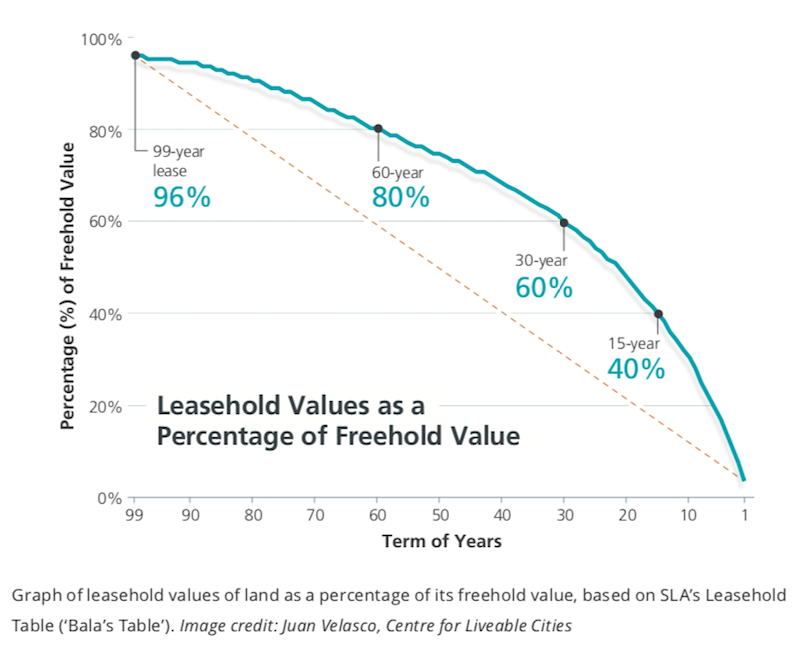 Looking at tenure alone, though, the value of freehold property starts to differ from that of leasehold property most starkly at 2 points of time:

What this means is that fewer people will be able to afford the big cash outlay to buy your leasehold home, essentially making it harder to sell as your pool of eligible buyers gets much smaller.

In this light, many homeowners would be pressured to lower the selling price of their homes.

This factor is especially relevant if you’re buying a resale property of a certain age.

For instance, if you’re planning to buy a leasehold property that’s 35 years old, you’ll only be able to sell it 3 years later if you want to avoid a hefty Seller’s Stamp Duty.

The property would be 38 years old by then – still not a problem for the next homeowner to finance. But they know that they will run into hurdles when they try to sell when the property ages past 40, which might make your home a less attractive option.

With freehold properties, you don’t run such a risk, as there will be fewer restrictions on bank loans and no restrictions on the use of CPF, regardless of the age of the property.

2. Value in an en bloc sale

The first thing to clarify is that although freehold properties are technically yours to own indefinitely, just because your property is freehold doesn’t make it immune to en bloc. if there’s an interested buyer and all of your neighbors are keen to sell, an en bloc deal can still happen.

Freehold properties are worth more in an en bloc sale for 2 main reasons.

First, developers (i.e. the buyer) know that you’ve got forever to own your home and are less compelled to sell; it follows that they’ll be willing to pay more for your home. Less so for leasehold developments, in contrast, especially if it’s nearing the end of its tenure when the property value eventually drops to 0.

Second, if a developer is planning to buy over an en bloc project that’s a 99-year leasehold, they’ll also have to pay to top up the leases of that site.

That said, whether your development is leasehold or freehold, you generally get a higher-than-market-value price for an en bloc deal. So the baseline price is already pretty high!

Read more: What is “En Bloc Potential” (And Does Your House Have Any)? »

What this means for these homeowners is that they’re essentially giving up their option to sell their properties en bloc to the highest bidder.

Instead, the freehold land – and the leasehold property that sits on it – reverts to the original developer after 99 years.

Such properties are few and far between, though. Some of them include The Scotts Tower in Orchard, Yio Chu Kang’s Cabana and The Shore Residences along East Coast.

3. Are 99-year leaseholds the same for HDB flats and condos?

Whether you’re living in a HDB flat or a condo, as long as it’s a leasehold property, it’s not yours to own indefinitely. Same same…

Condos, even ones built with a 99-year leasehold, are sold under a strata title, a form of ownership by which you own a share of the land on which your condo is built on.

In other words, you can actively attempt to en bloc your condo (provided the residents are willing to sell and there’s a developer interested to buy) if it’s a smarter financial move than to continue owning it.

Plus, a condo en bloc sale is usually like striking the property lottery – homeowners get prices above market value of their home.

With HDB flats, the Selective En Bloc Redevelopment Scheme (SERS) acquires chosen ageing HDB blocks at market value. Participation is compulsory, meaning you HAVE to sell if your estate is picked for SERS.

But if it isn’t – and only an estimated 5% of HDB flats will be picked for SERS – you can’t actively lobby for an en bloc, even if you find the value of your HDB flat depreciating as it ages.

Buying with a short term strategy

Seasoned investors usually already know when they’re going to sell their properties even before buying them.

For some of them, properties are best sold before they age, and the property value, assuming healthy economic growth, increases with each change of hands.

Many foreign investors in particular buy with such short term strategies, since the notion of leasehold proprietorship is common in countries like the US or China, where properties are built with 60-year leases.

In these cases, tenure isn’t much of a concern.

Rather, they’ll be looking at factors like developments in the area that could increase the value of the property.

And then there are those buying with a long term strategy of nurturing the asset – most commonly to rent the property out until, well, forever:

The dream: To rent out properties and watch your rental income flow in while you sit back and relax.

If you’re buying a property to rent out, you’ll want to look at leasehold properties. This can be simply explained with the concept of rental yield:

In other words, the higher the rental yield, the better – you’re earning the highest rental income for the lowest cost.

So we’re back to the same question: Leasehold or freehold?

Your potential tenants most probably (or definitely) wouldn’t be concerned about whether your property is leasehold or freehold.

Even though you paid a premium for your freehold unit, you can’t pass on this additional costs to your tenant by hiking up the rental fees. Your rental potential will be the same as a leasehold condo of the same size and in the same location (with the same nice hokkien mee at the nearby hawker centre).

Your rental yield for the leasehold unit would be:

While your rental yield for the freehold unit would be:

Tip: In fact, some landlords look specifically for leasehold properties that are older and hence cheaper, in hopes of reaping rental income for the least possible capital.

Even though the property will have no value once its lease expires, the landlords would most probably have made significant returns of investment by then.

Leasehold vs freehold condos: Which is the best choice?

99-year leasehold properties and freehold properties each come with their own set of pros and cons, and either one of the other might work better for you depending on your needs and future plans.

Plus, whichever angle you’re approaching your property-buying from, there are a ton of other factors that come into play, such as the property’s location and amenities.

Don’t just assume it’s easier to recoup your capital for a leasehold flat just because it’s cheaper, or that a freehold is a smarter option because of its longevity.

And once you’ve done your homework, happy home-shopping on Carousell!