Fast and Furious is out and all my car crazy friends (especially the team at Carousell Motors) are hyped! This hype translated into a spike of activity on the car-related items on Carousell.

Scrolling through the cute Toy Car Collectibles feature, my eyes popped at one Carousell profile: @jeffwong3968. This dude had over 6200+ diecast toy car listings (no duplicates either, mind you!) all in super neat display and a whopping 444 positive reviews on his Carousell account!

Feast your eyes on this gorgeous Carousell album of diecast car collectibles: 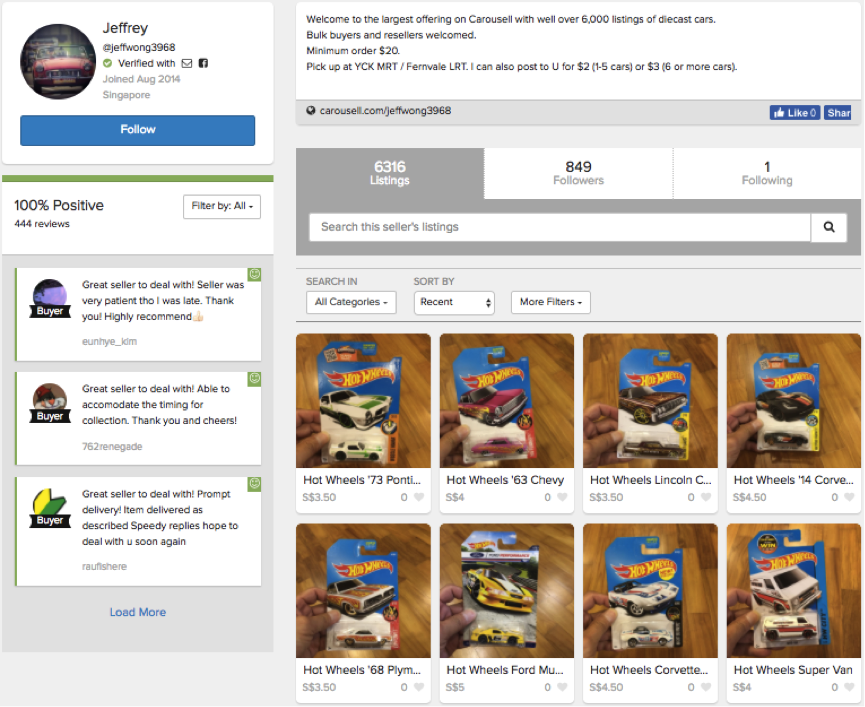 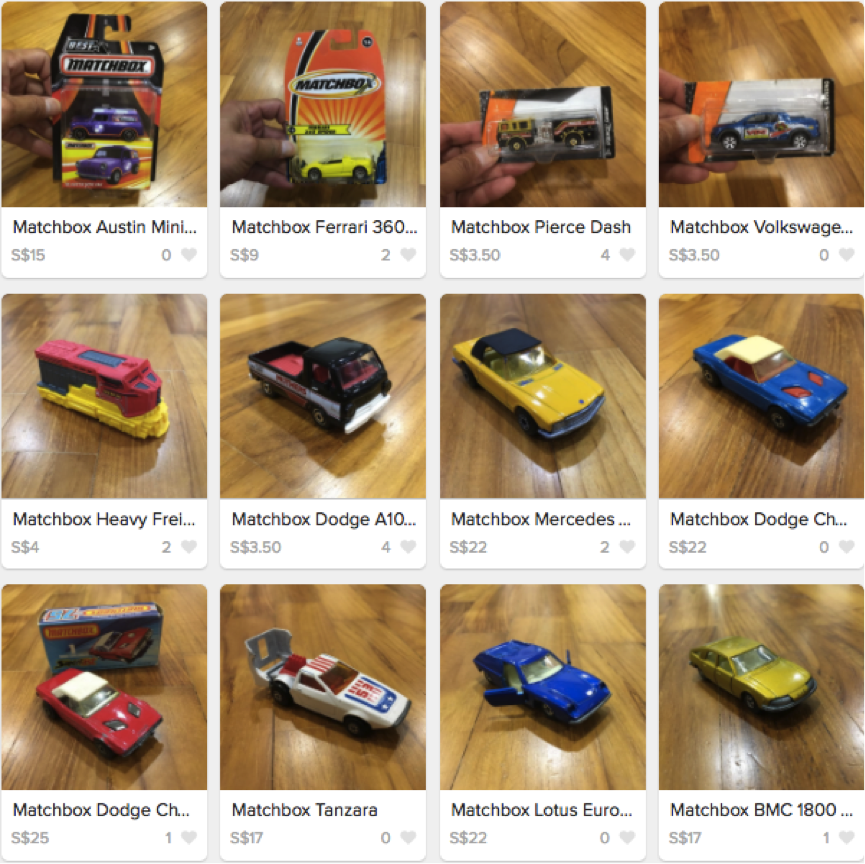 I wanted the full scoop, so I decided to lure the man out from behind this gem of a Carousell account. Unassuming and full of sunny vibes, Jeff came to meet me in a true vintage Volkswagen Beetle, the cutest car I had ever seen (and subsequently rode in 😛).

Jeff’s love for cars has been strong ever since he was just a young boy. However, it wasn’t until he chanced upon a vintage matchbox collectible 4 years back, one that resembled the cars he played with in his childhood, that his unstoppable passion for mini 1/64 diecast cars was sparked.

What could have been just a passing sense of nostalgia spun into something exciting for Jeff. He started collecting more and more diecast cars, expanding his collection beyond old vintage Matchbox diecasts into various genres such as expensive Japanese cars that are hot in demand by Asian collectors or cartoon or movie themed Hot Wheels sought after by younger and more casual collectors.

In a short span of four years, Jeff has amassed over 40,000 diecast car collectibles! He estimates that he has invested more than $100k in building his toy car empire so far.

“In the past, when you are young, you really cherish your toys because you don’t have that many. Over time however, they all go missing somehow and so when I saw it again, the feeling was like.. ‘OMG!! Are you kidding! I need to get it!!’ (*Chuckles*) Vintage toy cars like old matchboxes invoke a very deep sense of nostalgia, so you’ll see that those who collect old matchbox cars are mostly people from my generation.”

– Jeff, on when it all began 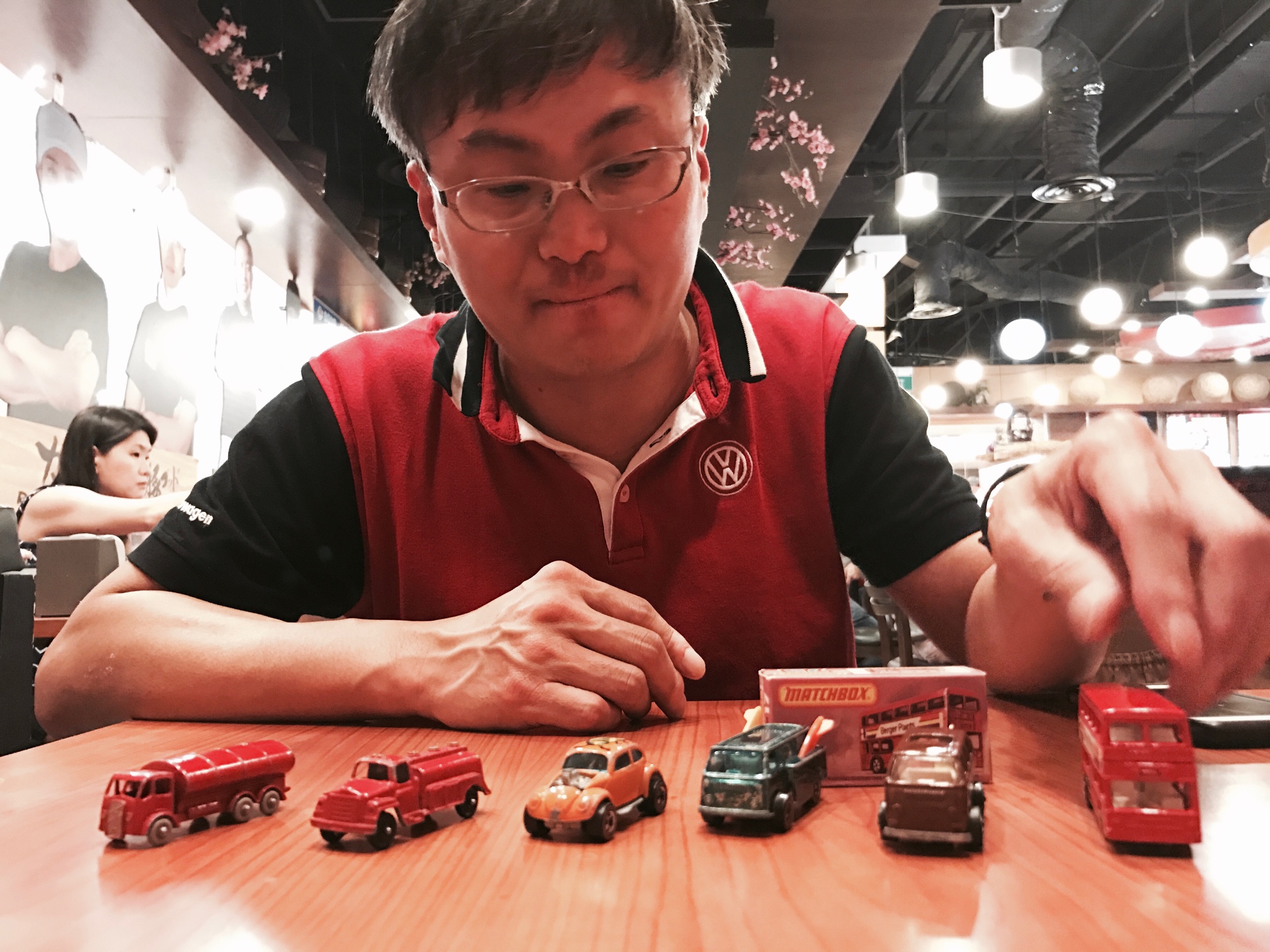 Jeff happens to be a purveyor of real cars as well – the other reason behind his toy car hobby.

Real cars take up a lot more space and are either too scarce or too expensive to buy. For Jeff, his 1/64 car collectibles help to capture the details of real cars and gives him with a more sustainable way to ‘own’ all the cars he loves. Like with toy cars, Jeff’s favourites are the classic ones that throwback to the good old times – in particular the Volkswagens. Jeff has 5 real cars at home, including three vintage Volkswagens. Check them out on his other Carousell account @herbie_and_company where he rents them out for fun! 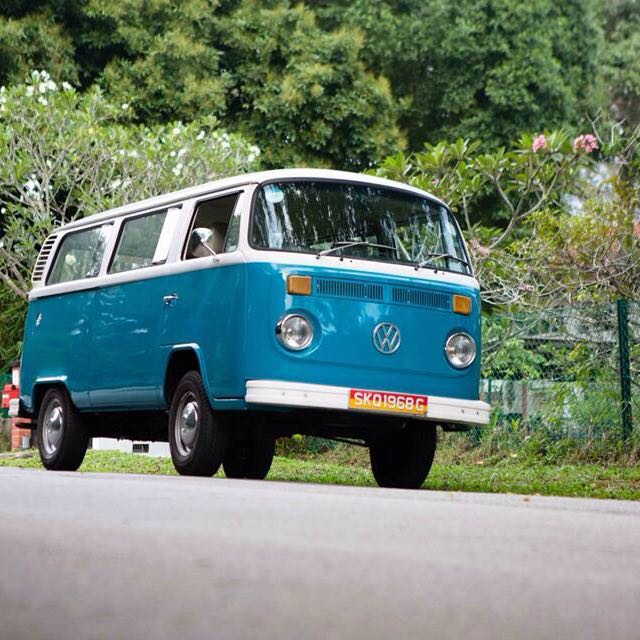 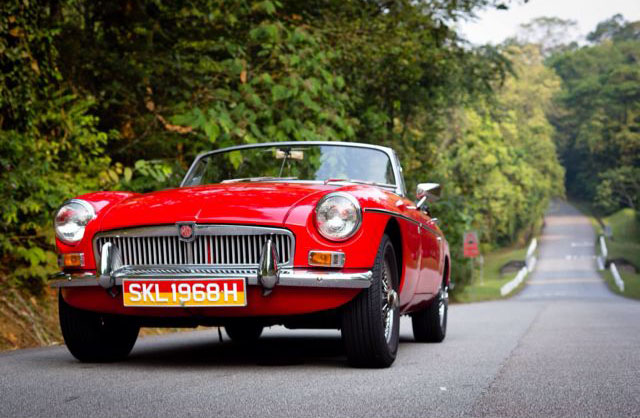 The toy car community in Carousell

Led by the love of toy cars, Jeff found his way into the Carousell community about 1 year and a half into his car collectibles hobby. He is a part of a niche but active group of car collectible collectors buying and selling on Carousell.

Because different diecast cars are usually released in unequal quantities across different countries, collectors like Jeff resorted to buying from overseas to complete their collection. To offset the shipping costs, they would buy the toy cars in bulk and sell them off. Sometimes, set buys are also necessary to acquire a certain model, leaving collectors with spares or duplicates that they don’t need.

To date, he has sold more than 10,000 of his toy cars on Carousell to fellow Toy Car enthusiasts and regularly checks Carousell for new additions he lacks. “It’s like a treasure hunt!” he remarked. “If I need one particular car model to complete a series then I’ll just get it from Carousell. Why buy from overseas when you have to pay for shipping and all that?”

As compared to other countries like Indonesia and Japan, SG’s toy car collectors community is relatively small, somewhere in the low thousands. Jeff has met over a hundred other collectors from the time he started out. Most of his toy car collecting friends are on Carousell, many of them originally befriended through the app.

“We started buying and selling from one another, discovered our similar interests then hit off from there.”

Jeff regularly keeps in touch with a handful that he became close with and meets them up every once in a while.

With its impressive variety and good prices, Jeff’s account sees a lot of repeat buyers who return to enquire on the latest car collectibles he is putting up. Aside from the hard-to-find ones that have appreciated in value, he sells models from the latest releases for less than retail ($9.90 cars for 7 to 8) as he buys them in bulk. There is also no guarantee that people can find the piece they need in departmental stores so browsing from Jeff and other collectors on Carousell is a lot more convenient.

According to Jeff, there also a small handful of dedicated toy car hobby shops in Singapore but most of them have moved on to sell on Carousell anyway. They still own their physical stores as storage space and only open over the weekends for people to collect their purchases.

Jeff sells his toy cars only on Carousell now as it helps him take stock of his collection With a collection as large as his and orders coming in daily (sometimes dealing with over a hundred cars at a time), this seems to make sense.

“Some people have requested to come down to my place to buy straight from my full collection, but I choose to sell solely on Carousell. My items are all packed away so it’s just too messy! I also let my buyers know to give me a heads up before they come to collect because I have to go dig out their orders first”

As a power seller, Jeff tells me that one of his greatest challenge is how to stay on top of his inventory. Once, he accidentally accepted an offer for a piece he didn’t have and felt so bad that he eventually got the car for his buyer at a loss, just to fulfil his end of the bargain. A deal is a deal he says.

Since then, Jeff has developed a few best practices to help him keep organised. “When stocks for a particular model gets scarce, I will make a note in my conversation with the latest buyer about how many are left. I’ll also make use of reserved function to indicate that this is the last piece so that I won’t oversell”.  On a side note, Jeff also likes to leave most of his sold Carousell listings marked as sold but undeleted as it serves as a good resource for fellow enthusiasts to get price references. With such great ethics, it’s no wonder his account is a hit with 444 positive reviews. 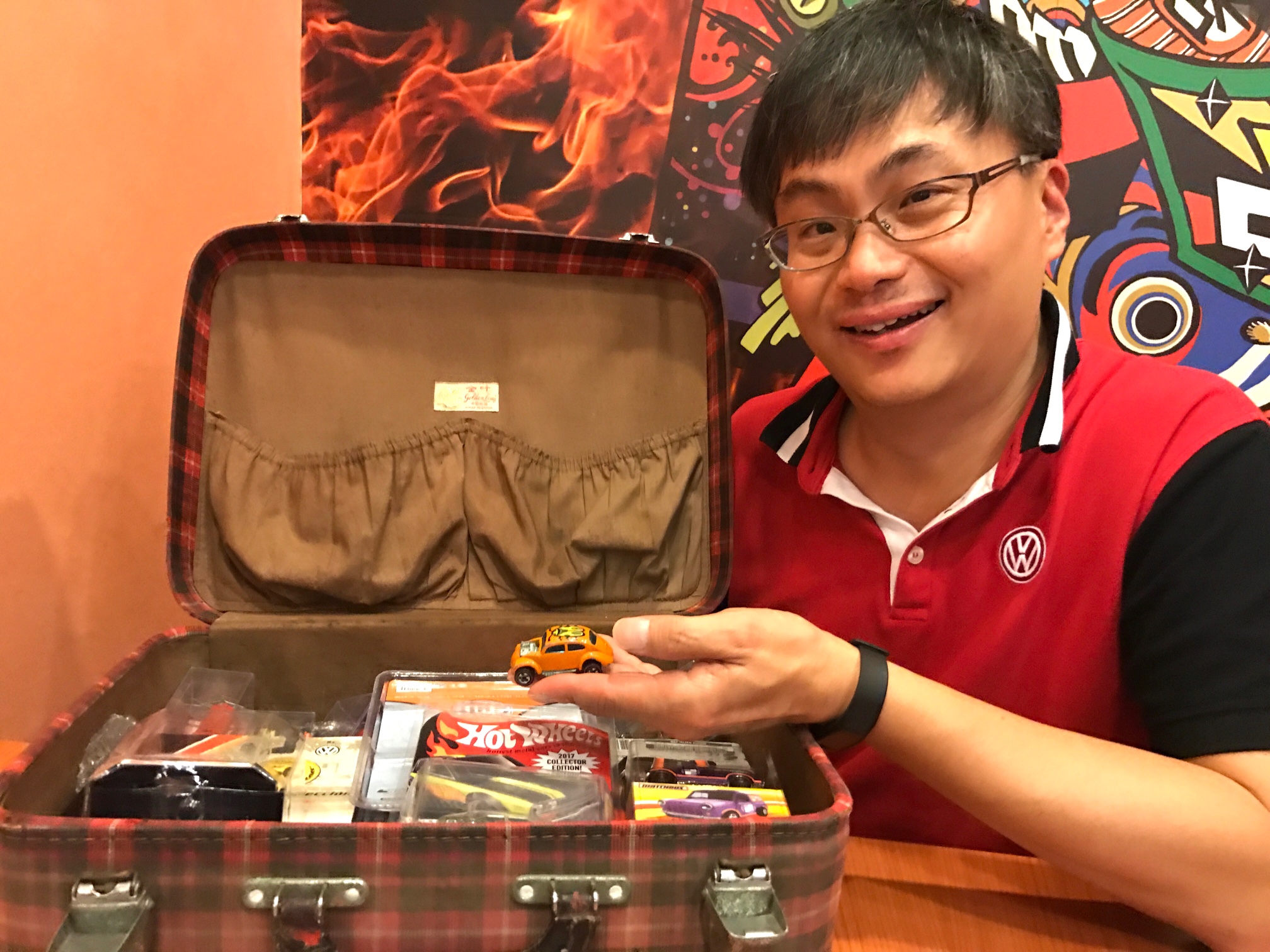 By the time Jeff and I finished our ramen, I felt like my eyes were opened to the world of toy cars as I’ve never seen it before. Besides getting a cool glimpse into his toy car collecting journey, what stood out the most for me was how Jeff lit up the whole time when he spoke about his hobby. Indeed, to find something that inspires and sparks a burning passion in life is truly a blessing. 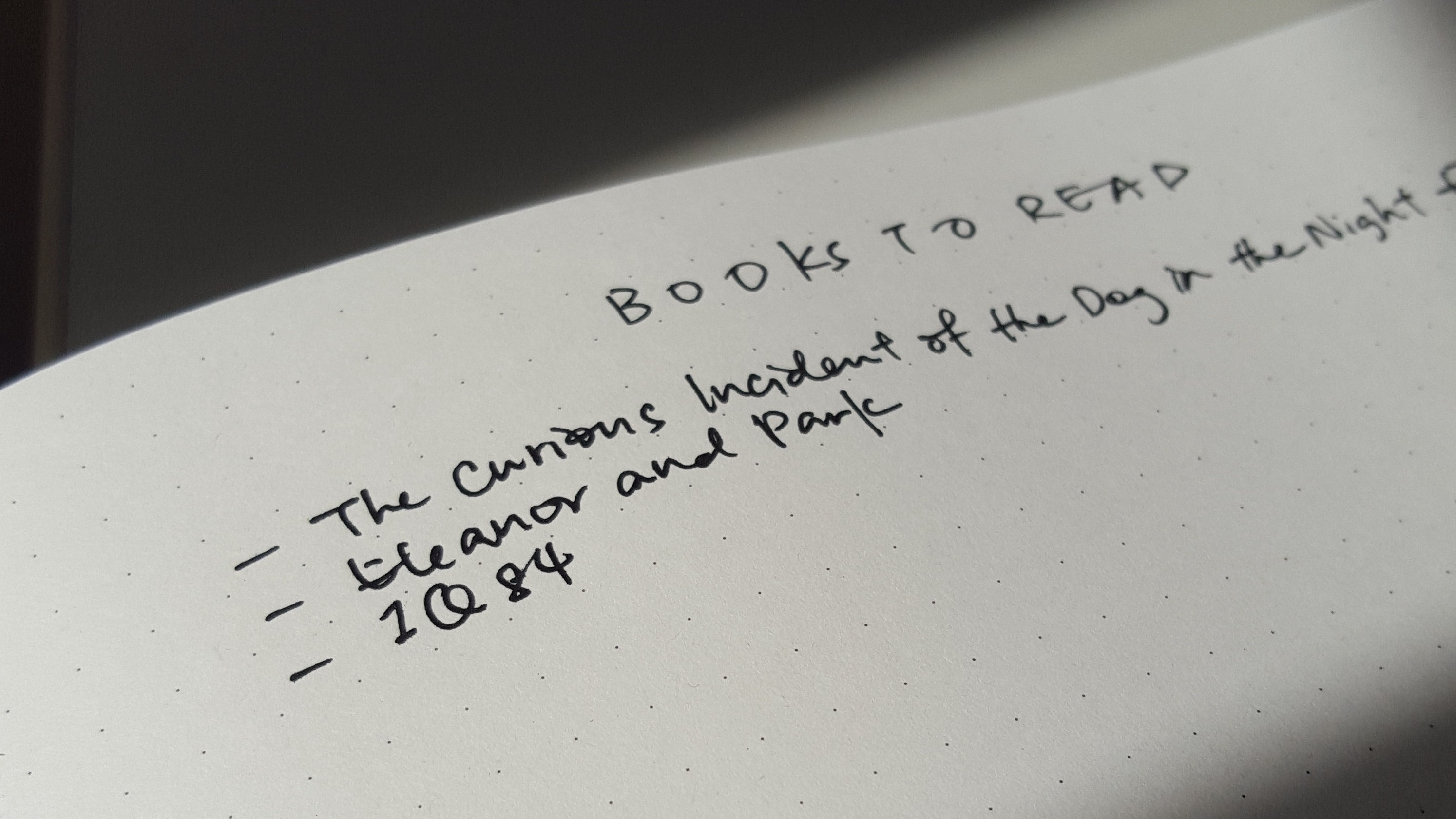 Bullet Journaling – A Quick Guide to Build your own Bullet...